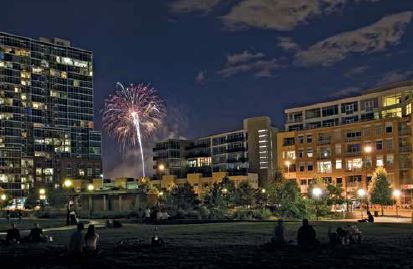 Riverfront Park is an urban infill planned community that currently includes 1,859 rental and for-sale housing units in 14 buildings, 49,000 square feet of retail and restaurant space, a museum, and three parks on a 23-acre site adjacent to downtown Denver. The Project was initiated by the City of Denver on former railroad land. It involved one firm that assembled and rezoned the land and a second partnership of firms that undertook the necessary development and construction.  The Project is linearly organized between railroad tracks and a 19-acre, city-developed park; it is connected to downtown by an iconic pedestrian bridge spanning the historic railroad tracks.

Denver was founded at the confluence of two quiet waterways, the South Platte River and Cherry Creek, where gold was first discovered in the Denver region.  The Riverfront Park community and the adjacent Commons Park are located in the historic heart of Denver, at the confluence of these two rivers. Over the city’s history, the waterfront has transitioned from an outpost to a boomtown to rail yards to a shantytown to a flood zone to a light-industrial park and now, finally, into a bustling downtown residential neighborhood.  Just prior to redevelopment, the site was owned for many years by the Burlington Northern Railroad and included a huge rail yard and many tracks, as well as aging industrial warehouses that were eventually razed.  The site, including the park, is bordered on the northwest by the South Platte River, on the southwest by Cherry Creek, on the southeast by the railroad lines, Union Station Project, and downtown Denver (with two pedestrian bridges that span the tracks), and on the northeast by 20th Street, a major urban arterial.  The site offers immediate access to Interstate 25 via two nearby freeway interchanges.  The site also benefits from a recently added pedestrian bridge across I-25 that connects Riverfront Park with neighborhoods to the north.