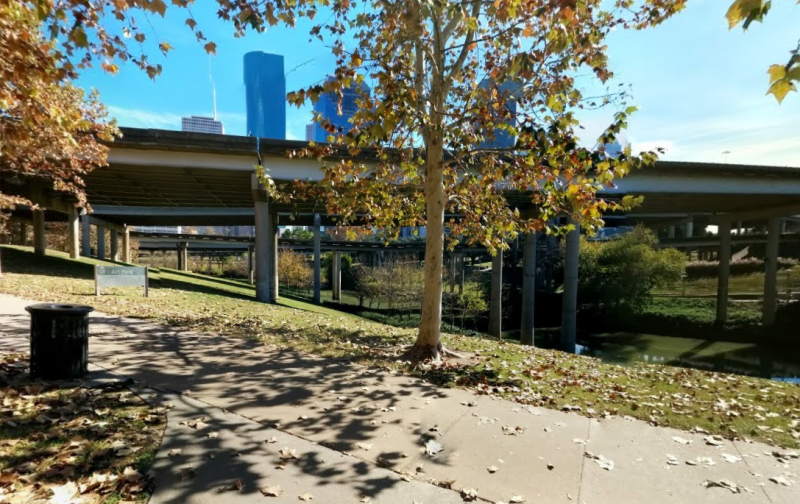 Buffalo Bayou Promenade is a 23-acre urban park and recreation area that transformed an overgrown, trash-soaked urban greyfield into a thriving waterfront. The $15 million landmark project both improved flood control capacity and transformed a marginalized space beneath the freeway into a safe, welcoming place for pedestrians. The project was one of the City of Houston's largest-ever investments in parkland, financed by both public and private sources. Improvements to the site included naturalization of gently sloping banks, extensive native landscaping, hike and bike trails, public art, dramatic lighting, 12 street-to-bayou entryways, interpretative signage and a new pedestrian bridge which connects the north and south sides of the bayou for the first time. 1.4 miles of paved trails through Buffalo Bayou Promenade link to over 20 miles for the entire revitalized Bayou. The activated space now provides an urban amenity for visitors and the growing downtown population.

The Value of the Buffalo Bayou Promenade
The Buffalo Bayou Promenade project then emerged as a means of both providing flood control and a green amenity for downtown Houston, gaining funding from a variety of sources including $9.3 million from the City of Houston, $3 million from philanthropic organizations, $2.2 million from the State of Texas and $500,000 from Harris County Flood Control District. A deliberate design, lighting and programming strategy allowed the Bayou to greatly shift in public perception, transforming from an unsafe space into a highly valued amenity. Previously, many property owners along Buffalo Bayou opted to orient their buildings away from the neglected waterway. The reinvigoration of landscape at the promenade catalyzed a change in perception, and land along this greenway is now viewed as viable real estate investment, especially for the growing housing market in downtown Houston.