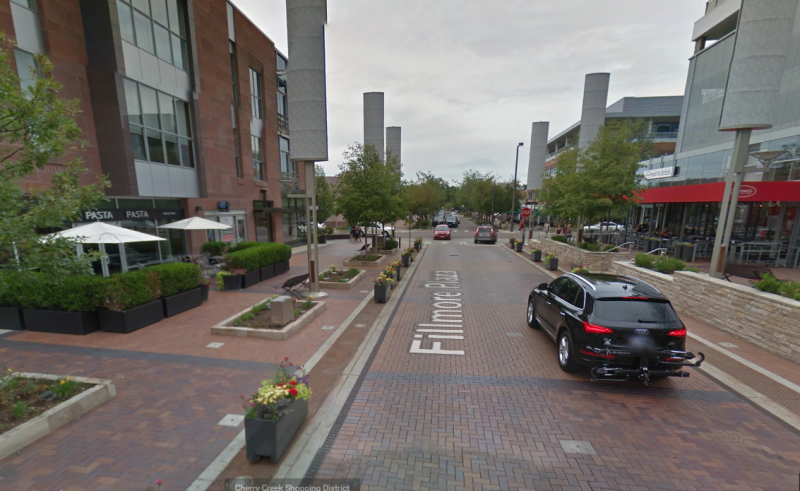 The 16-block Cherry Creek North retail district was designed to be Denver's premier outdoor shopping area. Yet deteriorating infrastructure, tired aesthetics and competition from an adjacent indoor mall had led to steady decline. Fillmore Plaza in the heart of the district was no longer a desirable public space since being closed to vehicular traffic in 1987. The new streetscape strengthens the retail environment, preserves the district's history and character, improves identity, beautifies the area, provides new lighting, improves signage, and adds 20 "Art and Garden Places" for shoppers to relax and linger. The redesigned Fillmore Plaza is now a vibrant hybrid street closed off to traffic only during planned pedestrian events.

Bringing it All Together
It was determined that the retail in the district was suffering from lack of access and exposure to shoppers. Through extensive visioning, public outreach, and multiple iterations, the design team was able to come up with a design that appealed to all stakeholders. Fillmore Plaza was redesigned as a hybrid street, open to two-way traffic with retractable stainless steel bollards that could close the street to vehicular traffic for events. The design would increase pedestrian space, enhance amenities, and strengthen the retail environment. All retail shops remained open during construction with a 5-ft pathway accessible to each entrance. Movable signs showed changes to parking and access, and weekly meetings informed retail owners of upcoming alterations.